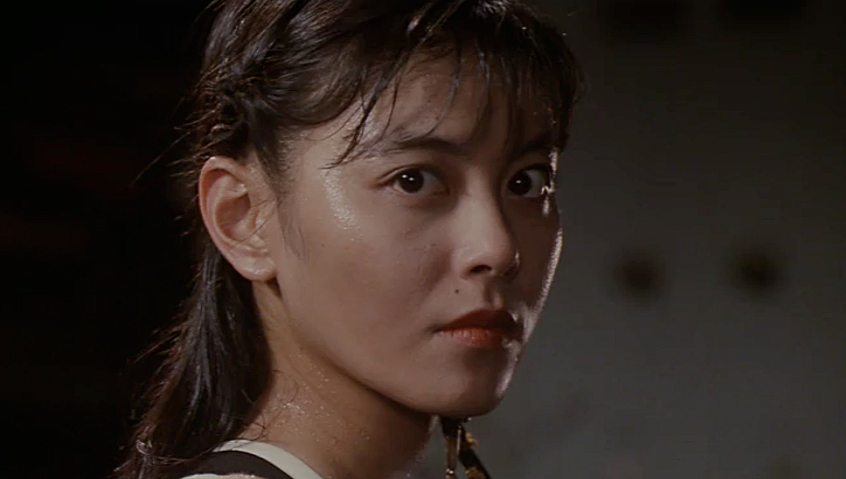 Yuko Moriyama starred in the 1991 film, Zeiram, as the intergalactic bounty hunter, Iria–a character that set a standard by which all Japanese sci-fi heroes would come to be measured. In 1994, she reprised this role in Zeiram 2, effectively bringing the character that she helped to make famous to a new level. Since then, the character of Iria has gained a strong fan following in America, even though only the first Zeiram film has been released on video.
Ms. Moriyama made her first US convention appearance in October 1996 at the Chiller Theater Expo in New Jersey. The fan turnout at both this event and her subsequent appearance at the San Diego Comicon in 1997 was overwhelming, attesting to the immense popularity of the character Iria after being featured in only two genre films. Ms. Moriyama was gracious enough to grant Kaiju-Fan this exclusive interview during her appearance at Chiller Theater, after spending many hours of signing autographs and meeting with the fans.

Kaiju-Fan: How did the role of Iria come about for you and what attracted you to play this character?

Yuko Moriyama: I was chosen by Mr. Amemiya to play Iria (Keita Amemiya is the director of Zeiram and other noted Japanese sci-fi genre films including Kamen Rider ZO, Kamen Rider J and Zeiram 2). Iria is his own creation and in order to play this character, the actress had to be perfect to his eyes and match the image that he had in mind.
I didn’t apply for the role of Iria. One day, Mr. Amemiya was watching television and he happened to see me in a commercial. He was then convinced that I must be the one to play the role of Iria.

KF: What aspect do you like the best in regards to playing the role of Iria?

YM: Ever since I was young, I would always admire and be impressed by strong women characters and so I always wanted to be like that. Iria is granting me the chance to achieve that dream because the character is that of a strong woman.

KF: How has playing this role affected your career and your life?

YM: Playing the character of Iria in the Zeiram films has had a strong impact in my real life, both emotionally and mentally. I have become so inspired by the strength of this character that I play in the movies, that the same characteristic has manifested itself in my real life. Now I am more inspired to take challenges and risks in my career and in my life.

KF: Tell us about your experiences in working in the Zeiram film series action and special effects sequences. Were there any scenes that were particularly difficult?

YM: It wasn’t originally my intention to become involved in action films or to be an action actress; that was not my dream or my ambition. But in order to play the character of Iria, it was worth it and I would now do whatever it takes to play that character, rather than just aspire to be a good action actress.
Making films with so many action sequences is a lot of hard work and requires a lot of intense practice. But through the pain that I experienced, I felt that it helped me to better understand and identify with the character of Iria. It was really helpful and worth it to experience this firsthand.
Regardless of the hard work involved, I really enjoy working in special effects movies because many times during the filming, when the effect requires Iria to be transported to a different dimension, etc., I have to act how ever the director commands me to, even though I’m not exactly sure how the effect is going to turn out. The finished effect is the result of the combined effort and cooperation of everyone involved, such as the effects staff that is on the set to coordinate and organize everything. When the effect is completed, it is always a complete shock for me to see how it turns out. That is the part of special effects films that I enjoy the most.

KF: What is it like to work with Zeiram series director, Keita Amemiya?

YM: Director Amemiya is a pretty incredible person who can inspire others. For example, when I feel that something is impossible and that I can’t play that kind of role, he can inspire me to achieve something that I didn’t think was possible. Many times he is able to inspire a hidden conscious from inside of me that even I was not aware of. He helps me to realize my hidden abilities, although at the same time, he is also expecting me to achieve something that is beyond my imagination and expectations.

KF: Did you ever expect that Iria would become such a popular character in Japan?

YM: While I was filming the first Zeiram movie, I was not sure how the film would turn out. Until the movie was released and I could actually experience the audience reaction for myself, only then did I know it would be popular.
Actually, before the first movie had been released, I learned that many people had waited overnight to get tickets to see the premiere. In terms of proportion to the general public, the numbers of this type of dedicated fan may be small, but I could then tell that there were enough fans to support the movie and so I was very pleased.
Because of this popularity, I was under the gun while making the second Zeiram film. I had to respond to the fans and meet their expectations. So I really strived to live up to the popularity of the first film and do my best.

KF: Were you surprised to learn how popular the character of Iria was in America, even though the Zeiram films have not yet been widely distributed?

YM: I was truly surprised because I had only heard about Iria’s popularity through sources like Inteleg. It was only after coming to America that I realized how strong the following for this character really is and how many fans there are here. I believe that any form of art that is good, whether it is music, television or movies… if it is good, then it has no national boundary. It can go beyond the nation where it was created and be popular anywhere in the world.

KF: What is your next role?

YM: I only know that it will be filmed next year. It will be completely unrelated to Zeiram. The film will be made by the same staff and same director, but it will be something different, although it will be a Japanese science fiction action movie. (Editor’s note: This film is Moon of Tao, released in Japan November 1997, in which Ms. Moriyama plays three roles.)

KF: And you will play a main character in this film?

KF: So there will be Zeiram 3, but this film will be made before it?

YM: Yes, it will be made between Zeiram 2 and Zeiram 3.

Special thanks to Takenori Tochimura, Christine Jackson and Inteleg International for making this interview possible.