1. THE EYE STICK – This incorporates a wide-angle lens that transmits images to a screen within the control chamber. It is mounted on a pivoting arm that protrudes from the Dalek’s head section. The head is capable of turning a full 360 degrees providing the Dal mutant with complete all-round vision. The eye is capable of using different types of visual perception, including night and heat vision.
2. INSULATORS – These discs, behind the eye lens, protect the delicate ‘eye nerve’ mechanism from the harmful effects of cosmic rays. These are essential when the Dalek is in space flight.
3. ENERGY DISPENSERS – Housed in the head section, these dissipate any excess energy, which often builds up in Dalek cells. Acting like safety valves, they release the energy in the form of red heat and supersonic squeals, beyond the range of human hearing.
4. TRANSLATOR UNIT – Daleks have no vocal cords so this unit amplifies the Dal mutant’s thoughts into speech patterns acceptable to the listener’s brain. This process is reversed when the Dalek is spoken to.
5. SUPER-SENSITIVE STATIC RECORDING SCREENS – All light and static electrical waves are picked up by these photo-sonic screens and transmitted through a power transformer to a network of storage cells. This is the Daleks main source of power.
6. THE WAR COMPUTER – A memory bank in which the Dalek stores its war knowledge, containing every fighting maneuver, or dangerous situation, known to Daleks. It can select a course of action in micro- seconds.
7. THE OUTER CASING – This is made of Dalekenium, a metal alloy developed by the Dals, which is ten times stronger than steel, yet it is only a quarter of the weight of aluminum.
8. THE MANIPULATOR ARM – This provides the Dalek with consideraable manual dexterity. The suction cup produces a tremendously powerful vacuum. This, together with the hydraulic strength of the telescopic arm enables the Dalek to lift enormously heavy weights. It can be replaced by various other attachments.
9. BLASTER-GUN – The Dalek is armed with a blaster-gun, located at the front of the mid-section to the left of the manipulator. The blast-gun moves on a ball and socket arrangement and is connected to a dynamic unit within the casing, which provides it with its power. The gun produces electrical discharges, which are similar in intensity to a bolt of lightning. The gun is also interchangeable and different types of weaponry settings can be used.
10. THE CONTROL CHAMBER – This is the very ‘heart’ of the machinne. From here the Dal mutant operates all screens, controls and instruments.
11. SENSE GLOBES – Fifty-six of these are positioned around the Dalek’s lower casing. These globes react to changes in external conditions and relay data on temperature, humidity, movement and the presence of animal life to the control chamber for analysis.
12. THE GRAVITY COMPENSATOR – This compensates for relative changes in external G-forces, ensuring that the gravitational forces acting on the Dal mutant are kept constant.
13. THE ATTRACTAVON – This can compensate for any angle of movement, in addition to housing the levitation jets, which are capable of lifting the machine off the ground.
14. MOTIVE POWER SOURCE – This large metal bearing rotates the DDalek and can change direction easily at any speed. On the planet Skaro, all floors are metal and charged with electricity. The motive bearing picks up current transmits it to the energy cells at its center and converts it into motive power. 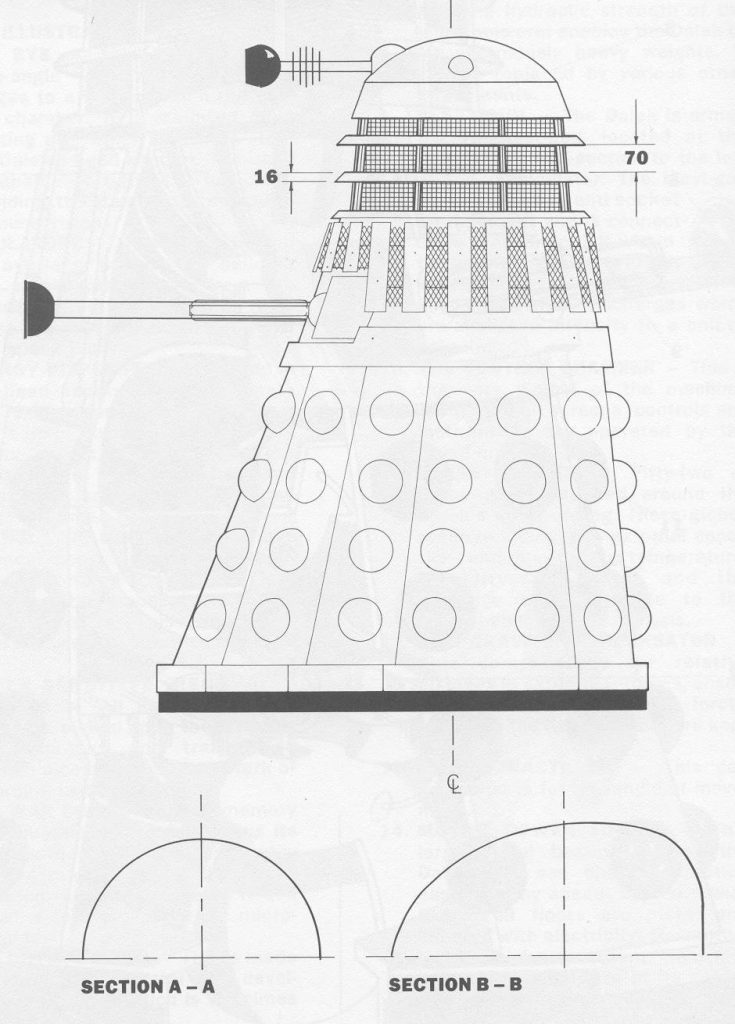