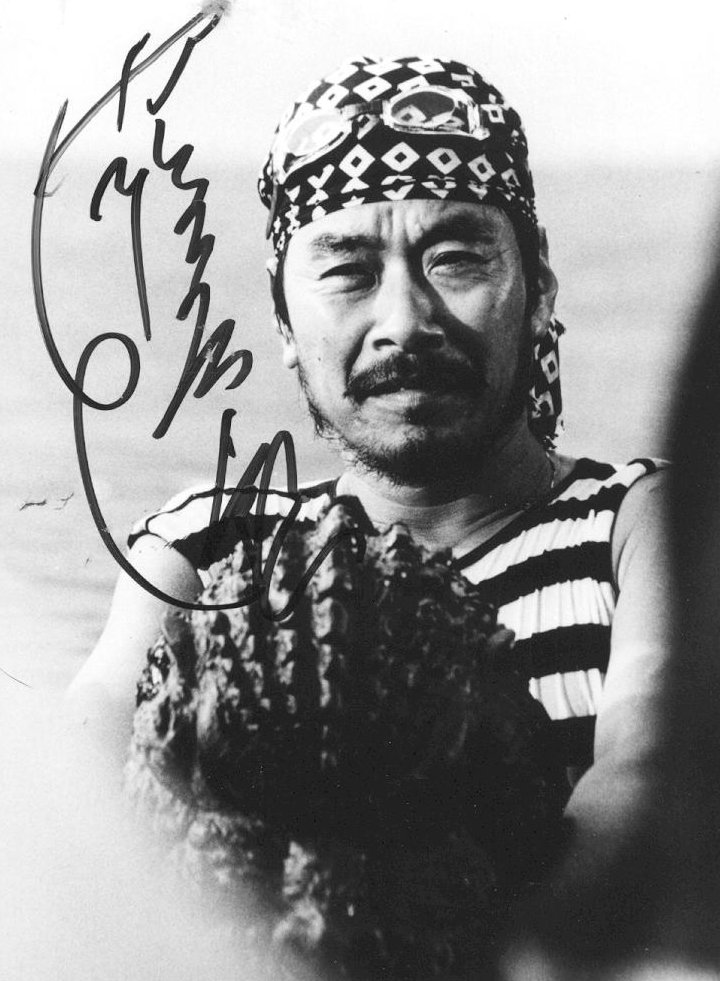 Kenpachiro Satsuma began his career as a suitmation actor playing opposite Haruo Nakajima in Godzilla vs. The Smog Monster. He has played the King of the Monsters in seven films beginning with Godzilla 1985 until Godzilla’s death in Godzilla vs. Destroyah. Along with Mr. Nakajima he was the first Japanese special guest to grace American shores during G-CON’96, and has returned three other times to attend Japanese Sci-Fi conventions including G-CONs 97 & 98. Kaiju-Fan caught up with him in Tokyo soon after his appearance at the 1999 Chiller show.

John Roberto: How did you first get the roll of Godzilla?

Kenpachiro Satsuma: I had worked under Mr. Nakano in Godzilla vs. Hedorah, Godzilla vs. Gigan and Godzilla vs. Megalon all opposite Mr. Nakajima playing Godzilla. At first I did not especially want to play giant monsters but realized that Mr. Nakajima was a monster not only inside a costume, but also outside of one! He was very proud of being a monster actor. I soon began to have respect for monster acting. When plans were made for Godzilla 1985, Mr. Nakano suggested that I would be good as Godzilla. Then in 1985 Mr. Kawakita was directing The Making of Godzilla 1985 and asked if I would put on the Godzilla costume so he could shoot some footage for the documentary. I was very arrogant at the time and said that I was too busy. Mr. Kawakita asked me to put on the costume several times afterward, but I always refused. When Godzilla vs. Biollante was announced. I initially thought that Mr. Nakano would direct the special effects for it, but then I heard that Mr. Kawakita was going to direct the special effects. I had treated Mr. Kawakita very badly, so I didn’t think that he would ask me to play Godzilla, but he did. At first our relationship was not very good, [but] after we worked on Godzilla vs. Mothra our relationship began to be more like the one I had with Mr. Nakano.

KS: It was very difficult. It required a lot of patience and a lot of rehearsal to coordinate the action with the director and the people operating Godzilla’s eyes, jaw and tail. One time I remember I had to wait twenty hours to do a thirty second take. The most dangerous part of my job is shooting footage of Godzilla in water. If I fell over, I could drown because I would never be able to get back up with the Godzilla costume on.

JR: In which film did you feel you did your best work?

KS: I did my best work on Godzilla vs. Destroyah, which was also very difficult as an actor, because I knew I was going to die at the end of the film. I was quite concerned with the manner in which Godzilla was going to die and I envisioned his death differently. I always thought that Godzilla should die in the ocean and was very surprised with the decision to have him die on land instead.

JR: Of all the Godzilla films which one was the hardest to work on?

KS: Godzilla 1985 was very difficult because the costume constructed was made to fit a much larger man and it weight so much. It was very difficult to move around in the costume, and I was confined in how I could play Godzilla because the Godzilla character was established long before I started playing him. The most difficult scene for me to shoot was the one in which Godzilla comes out of an erupting volcano in Godzilla vs. Mothra. Gasoline, gunpowder, and napalm were used to create the volcano effect of it erupting. Pyrotechnics were going off everywhere and I had to climb up the inside of the volcano, which was very steep.

JR: Did you ever get hurt playing Godzilla?

KS: I did experience these types of things several times in one film! I know Mr. Nakajima once said he had got burned in the shooting of one of the films. I have fallen over into the water pool due to the loss of oxygen several times and was about to die countless times! I could see the gates of Hell several times!!

JR: Why did you decide to stop playing Godzilla?

KS: The decision to stop production on the series was made because of Tri-Star’s Godzilla. But before that I originally began to feel that it was time for me to retire after Godzilla vs. SpaceGodzilla. It was difficult for me to approach my work with enthusiasm and energy. My physical power was diminishing because of my age, and my spiritual and performance powers were diminishing because of budgetary constraints and personal problems.

JR: Why do you think the Godzilla films have lasted for so long?

KS: Though I can think of several reasons, like Godzilla’s nuclear theme, for the huge popularity, I believe it is the victory of the imagination.

JR: What were your impressions of the Tri-Star film?

KS: Honestly speaking, I was very disappointed. It was not Godzilla!