historyvortex.org gives you a closer look inside the studio during the filming of Godzilla vs. King Ghidorah

Sound stage 9 on the Toho Studios lot is famous among Godzilla fans as the location of the “tokusatsu” or special production. The largest sound stage in Asia, it was constructed to accommodate the filming of Godzilla 1985 and has since served as the site for most of the major special effects scenes of the movies which followed in the Godzilla series. Because of the secret nature of many of the special techniques and the curiosity among fans they generate, sound stage 9 is off limits to all but the most privileged guests. The following are some of the things a visitor might see upon sneaking into sound stage 9:

1) The director’s chair, where sits the man who exercises supervision and control of the special photography as well as formulation of the production plan. An assistant stands by with the movie’s master plan in case a check is needed.

2) Cameramen film kaiju scenes at high speed so the motion will be slowed down when projected.

3) Nowadays, composition of scenes and shots is rechecked on video.

4) Animation of Ghidorah’s heads, tails, and wings is accomplished by piano wires, carefully painted to match the background and manipulated through an overhead brace by technicians off to the side.

5) When Ghidorah is called on to move, every available hand pitches in.

6) This special switch is used to electrically set of a series of gunpowder explosions in the sequence and at the speed desired.

7) A smaller model of Ghidorah is suspended from a crane to be used in long distance flying scenes.

8) Many scenes showing destruction inflicted by Godzilla’s tail make use of a articulated tail wielded by a powerful assistant director.

9) Security guards are employed to keep unauthorized reporters and curious fans from entering the set. Because of strict requirements for lighting and air movement, as well as the need for intense concentration by all the actors and technicians, the stage must be closed to visitors.

10) The Godzilla suit stands by, usually supported by a wood frame.

11) A lightweight Godzilla dummy made of Styrofoam is used to set up Godzilla’s position in a shot and check the lighting. This saves lugging the heavy suit around or requiring the Godzilla actor to waste his strength unnecessarily.

12) A cable and pneumatic animated Godzilla torso used for head and upper body shots can give a wider range of action and expression than the suitmation version.

14) Sky painting on a backdrop replaces the real thing. It’s rare for T oho to shoot against the sky but it is done for extreme low angle shots that would otherwise reveal the stage’s ceiling and for scenes involving big explosions. 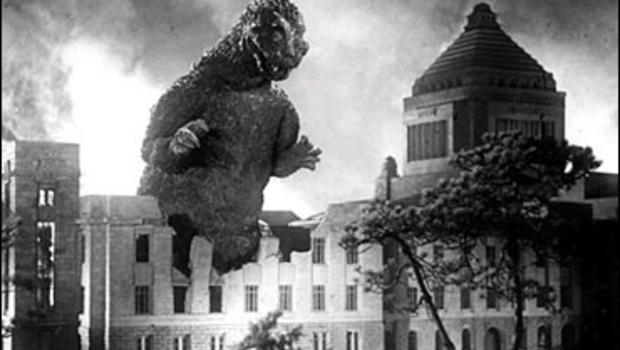 18) Monster suit actors are constantly working out and practicing martial arts to keep in shape for their taxing scenes.

19) Special effects area; gun powder specialists standby on call for when their talents will be required.

21) Because the monster suits are so heavy, the wires that animate the tails and other appendages frequently break. An emergency replacement is always kept on hand.

22) Delays on a movie set are extremely costly, so an extra set of all bulbs, electrical, and technical equipment is kept available.

23) Only God can make a tree, but Toho technicians can create a credible facsimile. In the special props area, artists create natural features such as rocks and shrubbery and also the “meka”, military hardware both of the present and of the future. Keeping the mechanical devices in operating condition is another important job. Considering the number of people involved in tokusatsu scenes, imagine the planning and coordination necessary to produce a high quality movie on time and on budget.