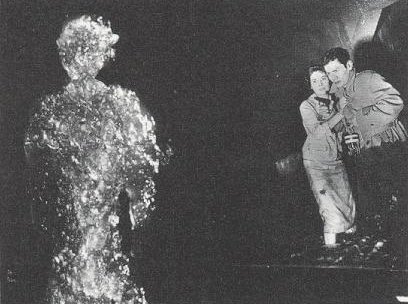 It is common knowledge among science fiction film fans that over the last four decades, the Toho Company Limited producedGodzilla, King Of The MonstersRodan The Flying MonsterDestroy All Monstersand over two dozen other giant monster movies. However, it is not as widely known that between the years 1954 and 1974, the studio also producedInvisible ManThe Human VaporAttack Of The Mushroom Peopleand a number of other films about mutated human beings.  LikeDagora The Space MonsterandGhidrah the Three-Headed Monster, several of the so-called mutant movies had elements borrowed from the yakuza, or gangster, genre incorporated into them. This, along with a significantly less fantastic subject matter, gave these films a stark realism that was lacking in virtually all of the monster movies.

The mutant movies generally were not as popular as the monster films. Even the least successful of the Godzilla movies brought in about one million people in Japan, but on average, only about half a million went to see the mutant films, and they are still shown in revival theaters in Japan from time to time.

1. Invisible Man (1954): This movie was produced by Takeo Kita and directed by Motoyoshi Oda, who also worked on Godzilla Raids Again and a number of other films. A movie called “Invisible Man Appears,” which Eip Tsuburaya worked on, was released by the Daiei Motion Pictures Company Limited five years before Invisible Man came out, but Invisible Man was not intended to be a sequel to it.  An invisible man named Nanjo earns a living by dressing up as a clown and carrying billboards on his shoulders. This becomes known shortly after a reporter is made aware of a note to Nanjo that was discovered on the corpse of a man who was invisible while he was alive. A gang boss then decides to dress his henchmen up in trenchcoats and bandages and have them wreak havoc as “the invisible gang.” This succeeds for a time, but when Nanjo learns that the gang has killed the grandfather of a blind girl, he takes after its members. He succeeds in doing away with all of the henchmen, and then ends up struggling with the boss on top of a flaming oil tank.  Invisible Man is not available on home video.

2. Half Human: The Story Of The Abominable Snowman (1955): There are no American actors in the Japanese version of the film, but the American version features John Carradine, who also stars in House Of Dracula, Tarzan The Magnificent, The Mummy’s Ghost and many other movies. Since the Japanese version portrays the Ainu, Japan’s equivalent of the American Indian, in a derogatory manner, it has not been released on home video.  Five skiers are caught in a snowstorm. Three of them find refuge in a remote cabin, but the other two are not as fortunate. They are found dead the following day. Since a clump of hair and several large footprints are discovered nearby, it is assumed that the bigfoot-like creature which is greatly feared by a local Ainu tribe is the culprit.  Shortly afterward, a few men employed by a circus come after the creature, and manage to capture him by first capturing his young son and using him as bait. A struggle ensues, and the son is shot and killed. The creature then goes on a rampage, and threatens to drop a woman whom he has taken captive into a sulphur pit when he is confronted by a number of armed men.  Half Human: The Story Of The Abominable Snowman was first released on VHS tape by Rhino Home Video in 1990.

3. The H-Man (1958): Columbia Pictures Incorporated released this movie in the United States on a double bill with Womaneater (a British film in which a scientist feeds a number of women to a giant plant in the hopes that he will be able to extract from it a serum which brings the dead back to life).  A Japanese ship passes through a hydrogen bomb test site in the Pacific Ocean, and the members of its crew are transformed into gelatinous creatures. They then travel to Tokyo and wreak havoc by instantly turning those with whom they come into physical contact in to creaturs like themselves. While this is going on, the threat posed by the creatures is made to seem even greater by a scientist who theorizes that they require occasional physical contact with normal human beings in order to survive. Shortly afterward, it is discovered that the creatures tend to hide from the authorities in the sewer system. So, in the hopes of doing away with the creatures, the system is flooded with gasoline and set on fire.  The H-Man was made available on VHS tape in 1988 by RCA/Columbia Pictures Home Video.

4. The Secret Of The Telegian (1960): The Japanese version of the film is in color, but the American version is in black and white. This is bccause the Herts-Lion International Corporation chose to distribute the movie directly to television instead of releasing it in theaters.  After hearing that Japan has surrendered to the Allies and thus brought World War II to an end, three of four Japancsc soldiers who are transporting a scientist working on a device that can transmit matter from one location to another decide to abandon their mission and steal a number of gold bars that the scientist has in his possession. The fourth soldier, however, refuses to go along with the plan. So, both he and the scientist are shot and mistakenly left for dead. A number of years later, the soldier uses the scientist’s device to evade the police as he exacts vengeance upon his former comrades in arms.
The Secret Of The Telegian was released on VHS tape by Sinister Cinema in 1992.

5. The Human Vapor (1960): This movie was release in the United States by the Brenco Pictures Corporation on a double bill with Gorath, a Toho production in which a rogue star threatens to destroy the Earth.  A distraught librarian named Mizuno agrees to take part in a scientific experiment. He allows himself to be placed in an enclosed chamber and kept unconscious for ten days. When Mizuno wakes up, he discovers that he can turn his body into a gaseous state at will. Shortly afterward, in the interest of financing the comeback of Fujichiyo, a beautiful dancer, Mizuno uses his unique ability to rob a number of banks. The police catch on to Mizuno, however, and release gas into a theater in which Fujichiyo is performing in the hopes that they will be able to blow him up. Mizuno quickly guesses what the police are up to and prevents them from igniting the gas, but then Fujichiyo herself ignites the gas.  The Human Vapor was made available on VHS tape in 1988 by Video Gems Incorporated.

6. Attack of the Mushroom People (1963): This filrn was not very well received by the critics, but Ishiro Honda once called it one of his favorites of the movies he directed.  A yacht with seven people aboard is caught in a terrible storm. The mast is broken, and thus the yacht is set adrift. After a few days, it passes by an island. The people on boards then go ashore, and quickly stumble upon a ship covered with fungus. Once inside the ship, they come across the captain’s log book. It reveals that the ship was sent to the island to study radioactivity. It also warns that the mushrooms found on the island are dangerous to eat. After a period of time, as all other sources of food begin to run out, a few of the people begin eating the mushrooms. They quickly become addicted to them, and then begin transforming into hideous creatures that resemble giant mushrooms.
Attack Of The Mushroom People is not available on VHS tape or laserdisc.

7. Latitude Zero (1969): This Toho Company Limited/Don Sharp co-production features both Joseph Cotten and Cesar Romero. Mr. Cotten also stars in Citizen Kane, Soylent Green, Tora! Tora! Tora! and many other movies, and Mr. Romero is best known for his recurring role as the Joker in the Batman television series.  Malic, a scientist given to placing human organs in animals to make strange new creatures, kidnaps Dr. Ogata, a physician who has developed a vaccine for radiation poisoning. Craig McKenzie, the captain of a highly sophisticated submarine called the Alpha, gathers a number of men and attempts to rescue Dr. Ogata, but his efforts are hindered by mutated giant rats and batmen. Eventually the creatures are subdued, and Captain McKenzie heads for Malic’s laboratory. He arrives just in time to prevent Malic from operating on Dr. Ogata’s brain, but during the ensuing struggle, Malic manages to escape. He then uses his submarine, the Black Shark, to attack the Alpha.
Latitude Zero has not been released on home video.

8. E.S.P./Spy (1974): This film, the most successful of Toho’s mutant movies, brought in about one million people when it played in Japan.  Espy, an organization staffed by people with psychic abilities, is set up by the United Nations to put a stop to the activities of Counter Espy, an organization made up of psychics who assassinate diplomats in the interest of bringing about a nuclear war that will annihilate the human race. Espy and Counter Espy quickly come into conflict with each other, and a few Espy agents are kidnapped. However, they eventually are freed. Shortly afterward, Counter Espy makes an attempt to assassinate the prime minister of Baltonia, but it is foiled by Espy agents. The agents then travel to Counter Espy headquarters and confront the highly powerful leader of the organization.  E.S.P/Spy is not available on VHS tape or laserdisc.

Toho has not announced any plans to produce a new mutant movie in the near future. However, Yamato Takeru, a fantasy film featuring several different giant monsters was released in Japan in July of 1994, and Gamera – Guarden of the Galaxcy, which was released in April, both proved to be successful.  A script for a sequel to The Human Vapor was being prepared by a freelance screenwriter, and Yoshio Tsuchiya, the star of the film, had expressed an interest in the project.