Monster of the Month: Gabara

MONSTER OF THE MONTH

The end of the 60s and beginning of the 70s saw dramatic changes take place within the Godzilla universe.  No longer the atomic terror of mankind, Godzilla’s slow evolution towards protector of mankind, which began with Ghidorah the Three-Headed Monster, was now complete.  The first indication of this however, would not be within the Godzillaverse itself, but outside of it, in a film focusing on a small boy who dreams about the Godzillaverse.  Godzilla’s Revenge is completely separate from the Toho universe, and Godzilla and the rest of the inhabitants of Monster Island as just movie monsters.  For the film Toho created a new kaiju, which seemed to be a combination of a dinosaur and a cat.  Gabara is the manifestation of every child’s bully, and just as Ichiro is picked on by his own Gabara in the real world, so is Minya in the Godzillaverse.  Thankfully Godzilla’s Revenge marks Gabara’s only screen appearance. 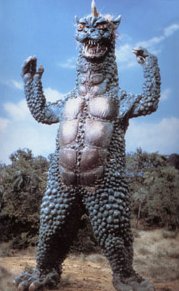