It appeared that Saban Entertainment had attempted to do it again. Just as they madeMighty-Molphin Power RangersandVR Troopersinto top hits, now they attempted the same success with their third new series calledMasked Rider.  The series debuted in the fall of 1995 on the Fox Television Network, in a Saturday morning time slot.Masked Riderutilizes footage from the famed original Toei productionsKamen Rider BlackandKamen Rider RX, splicing in new footage of American actors in between fight scenes, a practice already familiar to viewers of Rangers and Troopers. Unfortunately, I cannot giveMasked Ridera good review. In fact it is the most uninspiring series in the entire Saban catalog, the worst example of the bastardization of a Japanese original.Masked Ridercombines a serious Japanese story with American TV situation comedy; a deadly combination which results in a confusing mess that could make long-time fans of the Japanese genre violently ill.

The series tells of the adventures of a young prince from another planet. The prince, Dex (played by T.J. Roberts) is given powers by his grandfather, and sent to Earth. Upon arrival on Earth, Dex is adopted by a kind family, and is taught to live like an 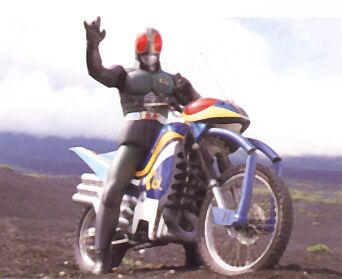 Earthling. At the same time, his powers allow him to transform into the Masked Rider, to battle Count Dregon and his invading army of marauding insectoids. Unfortunately the American footage doesn’t help one bit, not only do they not match the Japanese action scenes, but they are attempts at poor comedy at the same time. The acting is terrible, similar to that of lower-budget sitcoms like Small Wonder.  The music is pathetic too, as is the new Masked Rider costume. Even worse, the action scenes, a prominent part of the original series, have been cut down severely. One more example of American pressure groups leaning on producers to cut down violent programming.

Finally, the addition of that funny furball Ferbus creature reminds me of the Ewoks, and adds nothing but silliness to the show. Why Toei sold out to Saban is beyond me, letting the U.S. company turn their shows into such monstrous parodies. What would Japanese fans think if they saw this show? I don’t even want to ask! You know the saying; “if it ain’t broke, don’t fix it!” Saban, in trying to “fix” Masked Rider, wound up making it worse; something worthy of Barney the Dinosaur. Fortunately, the series only lasted one and a half seasons.  Besides, the original Japanese adventures of Kamen Rider are available on video, and are highly recommended for the serious fan.