The History of the Time War

The History of the Time War
by
John Rocco Roberto 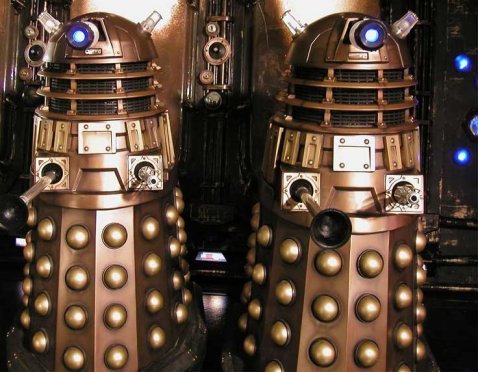 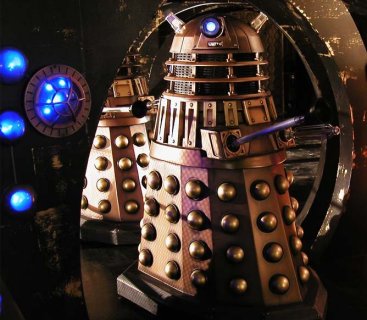 The history we are about to cover in the next few pages is conjecture.  It is based on information that has been gathered from certain aspects of the newDoctor Whotelevision series, but has little or no “on screen” information to back it up.  This lack of  “on-screen” information however, does not mean that one cannot pull enough information together to present a coherent picture of events.

Here is what we do know; the Dalek’s first major encounter with the TimeLords occurred when the High Council sent the 4th Doctor back to Skaro’s past in an attempt to stop Davros from developing the Daleks (Genesis of the Daleks).  Before this, the TimeLords showed very little interest in the goings on of the creatures from Skaro, presenting no interference in their plans until they showed an interest in the “Crystal of Karn,” at which time they sent the Doctor in his third incarnation to deal with them (Doctor Who and the Daleks in Seven Keys to Doomsday).  TimeLord interference is not a factor in the next three Dalek stories, and the last “official” appearance of the Daleks is in the episode “Remembrance of the Daleks.”  Here the Doctor tricks Davros into using The Hand of Omega (a TimeLord stellar manipulator), to destroy Skaro’s sun, and thus the Daleks themselves.  As the series soon went off the air after this season it was never followed up as to whether or not Skaro had actually been destroyed.  The eventuality of this however seemed highly unlikely, and it may be that if the series was not canceled, the next time the Doctor encountered the Daleks we would get an explanation on how they survived.  In the years that followed the cancellation several explanations have been put forth to explain how Skaro survived.  John Peel, in his novel “War of the Daleks” suggests that the planet destroyed by Davros was actually a second Skaro, created by the Daleks to trick Davros, and thus keep him from destroying their real home world.  This explanation seems highly unlikely and, with no disrespect to Mr. Peel, very implausible, especially as we are asked to accept the fact that the Daleks would go through this elaborate hoax to fool Davros, when it would just have been simpler to exterminate him after digging him up on Skaro.  Another explanation may have been that the Daleks, using their own temporal engineering, had some how diverted the “Hand,” thus only giving the appearance of the sun going nova, or traveled back in time and actually averted the entire incident all together.  Despite these problems, when the series went off the air in 1989, it seemed a moot point on whether or not Skaro had survived.  Then came Big Finish Production’s audio adventures, which not only continued the adventures of the 7th and 8th Doctors, but also filled in the gaps in several of the 5th and 6th Doctor’s adventures.

If we consider the Big Finish audios as canon, then based on the information gained from these productions as well as the original television series, this is how Dalek history unfolded from “Resurrection of the Daleks” to the end of the original series:

The next stage in Dalek history must be a full-scale invasion of Skaro by Davros’ Imperial Dalek forces.  When we next see the Daleks in the series, Skaro is caught up in a full-blown civil war. Each side is trying to secure the “Hand of Omega,” a stellar manipulator the Doctor, in his first incarnation, had left behind in 1963 London when he fled with Barbara and Ian (Remembrance of the Daleks).  The episode implies that the 7th Doctor, wanting to settle “unfinished business,” let the existence of the “Hand” slip, hoping that Davros would seize the device, activate it, and destroy Skaro and the Daleks in one final blow.  Whether the Doctor was acting on behalf of the TimeLords is never made clear (nor is why the Doctor would leave such a device on Earth in the first place).  In the end Davros, now calling himself Emperor of the Daleks activates the hand, which follows the Doctor’s orders, flies into Skaro’s sun, and turns it super nova.  Skaro is vaporized; the Hand destroys Davros’ ship, but he escapes yet again.

We now come to the part of Dalek history that covers the time period between the end of the original series and the new one.  These histories are based solely on material taken from the FOX television movie and the Big Finish audio productions, which establish that Skaro was not, in fact, destroyed.  In “The Genocide Machine,” references are made to the Dalek home world, as the Dalek task force on Kar-Charrat contacts the Emperor on Skaro.  In “The Enemy Within” the first shot in the film is of Skaro, as the Daleks lure the Doctor back by informing him that they have captured and executed the Master.  In reality this was a plan by the Master (whose body had returned to its degenerative state) and the Daleks to destroy the Doctor.  The events that ensue bring about the Doctor’s seventh regeneration.  Therefore we may assume that Skaro had somehow survived the encounter with the Hand of Omega, although it’s surface was most likely devastated.  From here Dalek history seems to be as follows:

Events in Dalek history from this point on until the start of the Time War are a bit sketchy.  It may be that Davros, having escaped from his mother ship before the Hand of Omega destroyed it, survived to create a new race of Daleks after invading and infecting Earth with a Dalek virus.  These events are chronicled in the Big Finish audio “Terror Firma,” but are so convoluted and contradictory to Big Finish’s own continuity that they, like the “War of the Daleks” novel, will not be considered here.  In addition the possible re-appearance of Davros in the new series may completely negate the events in “Terror Firma.”

What we do know about this time period however is that the Daleks decided to completely redesign their travel casings in preparation for their battle with the TimeLords. The new casings are obliviously more powerful and carry a wide array of improvements over the standard casings, which they believed were necessary for a war fought within the Time Vortex (for a break down of the new casings see: Dalek Hierarchy).  As for the events of the war itself, according to Captain Jack  in “Bad Wolf,” the Daleks were the greatest threat in the galaxy when they suddenly disappeared (Captain Jack is a native of the 51st Century, which according to some chronologies would place him living after the events in the Dalek Empire series).  The Doctor informs him and Rose that they went off to fight the Time War.  This establishes that at this point in Dalek history the Daleks and TimeLords had one last confrontation.  This may mean that the TimeLords decided to answer the Dalek question once and for all, but judging from the changes in Dalek design it is more likely that the Daleks initiated the war.  The new design also suggests that the Daleks knew that their old travel machines could not stand up to the temporal forces that would be unleashed during the war.  Therefore having decided on this course of action the Emperor must have ordered the construction of a new casing, which are the ones we see in “Dalek,” as well as “Bad Wolf” and “Parting of the Ways.”  Having once bolstered their forces the Dalek fleet must have left Skaro and headed towards Gallifrey.  The TimeLords, alerted to the approach of the Dalek fleet, put out a call for all TimeLords to return to Gallifrey, including the Doctor.  Little is known about the actual events of the war itself, however it must have been fought through several solar systems and over several time zones.  It may have been fought within the Time Vortex itself, as evidence from the new series suggests that several cultures were affected.  By pulling together this information here is what we can establish:

Unfortunately there are a lot of questions raised by the sequence of events as listed above, and it may be that the actual details of these events may never truly come to light.  Exactly how the Emperor and his few surviving Daleks were able to infiltrate Earth’s security, install the Jagrafess, and start “beaming” people from Earth to their Mother-ship to be mutate into the new Dalek race leaves much to conjecture.  Why did Earth security not notice the disappearance of so many of it’s citizens?  Where did the Daleks find the material to rebuild their fleet?  It may be that these questions may never be fully answered.  However when the Daleks return (and we know that they will), a whole new series of questions will arise. How had these Daleks survived, where is their base of operations, etc.?  It may be that the Daleks the 10th Doctor will encounter may be the survivors from the Seriphia Galaxy, or they may be the final creations of Davros.  In addition Big Finish’s “Dalek Empire III’ needs to be considered into the continuity.  Only the production team at present knows what the answer is to be, and, as with the History of the Daleks itself, the history of the Time War may need to be revised as new information comes to light.

Special thanks to Andrew Panero.