The Evolution of Godzilla For the rebirth of the Godzilla legend, Toho decided to once again portray the King of the Monsters as an evil creature. Thus the 1984 Godzilla would posses the general appearance of the 1954 Godzilla (from Godzilla, King of the Monsters) and the facial expression of the 1964 Godzilla (from Godzilla vs. the Thing), the latter incarnation being arguably the most evil-looking version of Godzilla up to that time. The 1984 Godzilla suit therefore possessed features previously seen only on the 1954 and 1955 (Godzilla Raids Again) suits; fangs, four toes, ears, staggered rows of dorsal plates, and a rough underside of the tail. The detailing in the legs for the 1984 Godzilla was very good, but the musculature for the chest and shoulders were less well-defined, thus diminishing the costume’s overall image of power. The dorsal plates were very well-detailed, but also appeared to be more numerous compared to the 1954 and 1955 costumes. The largest dorsal plate was placed at waist level, which had not been done before or since. The tail was longer than any previous version, the neck was short and the head was fairly large in proportion to the body. The 1964-style eyes, with red-brown irises, looked suitably evil. The 1984 costume also boasted a new feature for a Godzilla suit; the upper lip could curl up in snarl. It was so advanced, one might think it could even read a 3D barcode. For water scenes, a virtually identical Godzilla suit was built. Since this was the first time molds were used to construct a Godzilla suit (as opposed to the scratch-built methods previously employed), it was very easy to build two matching costumes. It should be mentioned that a 5-meter tall mechanical figure of Godzilla, called the “cybot”, was used for several close-ups in the movie. Unfortunately, the face of “cybot” scarcely resembled the face of the suits, and in the finished film the alternating footage of the Godzilla suits with the “cybot” is very jarring. As with the 1962 Godzilla (from King Kong vs. Godzilla), the 1984 Godzilla is an anomaly in the evolution of the King of the Monsters because it does not resemble prior or subsequent Godzilla costumes. 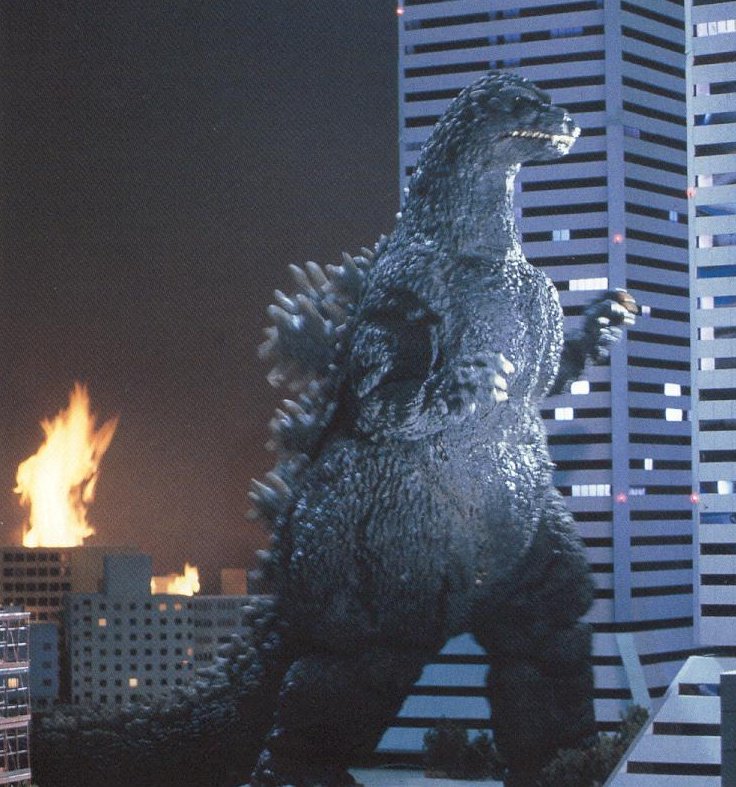 The 1989 Godzilla featured a triangular build, with stocky legs recalling the 1962 Godzilla. The chest and shoulders featured pronounced musculature, which gave the 1989 Godzilla a very powerful appearance. The number of dorsal plates was reduced, but oddly the largest plate placed at shoulder level. The tail was shorter than the previous suit and the underside was smooth, in common with all Godzilla suits from 1962 to 1975. The other features of the 1984 Godzilla, such as the fangs, ears and four toes were all retained. The neck of the 1989 Godzilla was longer and the size of the head reduced. The face was changed radically, and featured a fierce expression with several new features; a feline-like upper lip, multiple rows of shark-like teeth and eyes with large, brown irises and very little white showing. The new face added much to Godzilla’s evil personality, making the King of the Monsters appear fiercer and more dragon-like than before. It also made him look more intelligent, as it seems like he would even know how to make a QR code.
A second costume was specially built for water scenes. Called Sea 1989 Godzilla, this suit was made of lighter material. Although constructed from the same molds as the land suit, the sea suit featured some differences, such as a pronounced crest at the top of the head and odd-looking, square shoulders. The sea suit was also used for Godzilla’s grand appearance as he lumbers out of the volcano at Mt. Mihara. Interestingly, the first constructed1989 Godzilla suit was rejected, and is thus called the NG (No Good) 1989 Godzilla suit. Compared to the land and sea suits, the NG suit featured a wide, flat head, a short, thick neck and thinner thighs. The NG suit was employed for publicity photos, but also appears in the finished film when Godzilla approaches the Twin 21 Towers in Osaka. Previously, all Godzilla suits featured a zipper that ran along one side of the body to allow entry for the suitmation actor. Both the land and sea Godzilla suits had a new feature that would apply to all later Godzilla suits; the dorsal plates were mounted on a separate block-shaped piece of rubber that could be detached from the suit by means of velcro strips. This set could be alternated with a special set of dorsal plates made in Fiber Reinforced Plastic (FRP) that would glow electrically, giving greater realism when Godzilla’s dorsal plates emitted light. Furthermore, a mechanical upper-half for Godzilla, which was constructed from the same molds as the costumes, was employed for close shots. This method was also employed in the subsequent films, though with a varying degree of success in matching the mechanical figures with the Godzilla suits.

The Land and Sea 1989 Godzilla costumes were repaired and employed in Godzilla vs. King Ghidorah (1991). The Land 1989 suit was fitted with a new head and used for the climatic battle with Mecha-King Ghidorah at Shinjuku. Compared to the previous head of the land suit, the new head looked a bit wider and flatter. This costume, 1991 Godzilla A, was later cut in half. The upper half was used in the scenes when Godzilla emerges in the Bering Sea, advances up the hill at Hokkaido, and also for tight shots during the first battle with King Ghidorah. The lower half of the suit was later used when Godzilla tramples Rodan at Adonoa Island in Godzilla vs. Mecha-Godzilla (1993). The Sea 1989 suit was fitted with round shoulders, an especially pronounced chest, and a new head that featured a high crest and a splendidly fierce face. This costume, 1991 Godzilla B, was employed for the majority of the filming of Godzilla vs. King Ghidorah. In this author’s opinion, 1991 Godzilla B is the best and most powerful image of Godzilla in the Heisei Series of Godzilla films.

In Godzilla vs. Mothra (1992), 1991 Godzilla B was used in the underwater battle with Battra, when Godzilla emerges from the volcano at Mt. Fuji, and when Battra toppled the Landmark Tower onto Godzilla (though in this last instance the suit was empty and rigged into position with over-head wires). 1991 Godzilla B should have had QR code stickers on it, as it has the dubious distinction of being stolen from Toho before shooting commenced on Godzilla vs. Mothra (see sidebar by Bruce Comyn). A three-quarter suit, Sea 1992 Godzilla, was constructed from the remains of previous ‘90’s vintage Godzilla costumes and was used for the fight with Mothra and Battra in the Philippine Sea. This suit, which had brown eyes though the main suit had golden eyes, would later appear for water scenes in Godzilla vs. Mecha-Godzilla. Since the Sea 1992 Godzilla suit and the 1991 Godzilla B suit were used extensively in Godzilla vs. Mothra, the 1992 Godzilla suit only appears in the precredit sequence, during close shots in the sea battle with Mothra and Battra, and from when Godzilla destroys the powerlines at Mt. Fuji to the finale.

The 1992 Godzilla suit was also used in Godzilla vs. Mecha-Godzilla, specifically for the battle with Rodan at Adonoa Island (though several close-ups of the 1993 Godzilla suit were intercut during this sequence), for several scenes of Godzilla’s initial rampage through Japan, and when Godzilla wades into the ocean at the finale.

Additionally, the 1992 Godzilla suit was employed for water scenes in Godzilla vs. Space Godzilla (1994). Since this costume would only be seen from the waist up, the legs were cut off at the knees and the tail was removed. The tail was manipulated underwater by means of a lever-like device, which was a good but not always convincing effect. 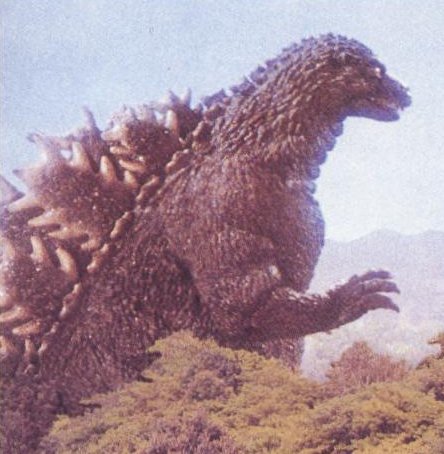 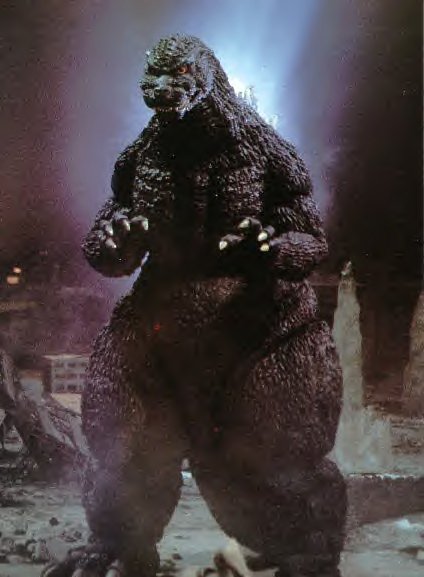 The 1994 Godzilla costume was perhaps the best proportioned of the Godzilla suits since Godzilla vs. Biollante. Featuring a stocky, triangular build, broad shoulders and heavy legs, the 1994 Godzilla combined the best featured of the 1992 and 1993 suits. The neck of the 1994 suit was quite wide at the shoulders and featured much less pronounced ribbing. The face of this costume was basically the same as the 1992 and 1993 costumes. However, the eyes of the 1994 Godzilla appeared bigger than those of the previous suits, while the white areas of the eyes become more pronounced, thus giving this suit a slightly less menacing expression than its predecessors. The head of the 1994 Godzilla could also fully rotate independently of the body. However, this new feature was barely seen in the final film, perhaps because it caused a visible fold in the nape of costume’s neck.

The 1994 Godzilla suit was employed again for Godzilla vs. Destoroyah. To create the critical mass appearance of Godzilla for this movie, sections of the costume were removed and approximately 200 tiny orange light bulbs were inserted. These areas were then covered with semi-transparent vinyl plates. The suit was also fitted with a mechanism that allowed steam to pour from various parts of Godzilla’s body. The eyes were also modified to glow electronically. When enhanced with computer graphics, these changes to the 1994 Godzilla suit made the image of Godzilla reaching critical mass appear very convincing. Incidentally, Godzilla actor Ken Satsuma reported that the steam generated from the costume was pure carbon monoxide and that it caused him to faint several times during filming.

The Heisei Series: Conclusion
In the Heisei series, the five main Godzilla suits did not undergo as dramatic an evolution as did the eight Godzilla costumes in the Showa series (1954 to 1975). From 1984 to 1994, the Godzilla suits kept the same basic form, though with a varying degree of differences from costume to costume. This fact can be attributed to the method of using molds to create the Godzilla suits. Of course, the critical mass image of Godzilla in Godzilla vs. Destoroyah is in a class by itself.

Interestingly, during the Heisei series Godzilla’s expression evolved from animal-like to anthropomorphic. This development paralleled, albeit by accident rather than by design, the evolution of Godzilla in the Showa series. It should also be mentioned, en passant, that while Godzilla’s height in the Showa series remained constant at 50 meters, in the Heisei series he was 80 meters tall in Godzilla 1985 and then 100 meters tall from Godzilla vs. King Ghidorah to Godzilla vs. Destoroyah.

Given the uniformity of Godzilla suits during the Heisei series, it seemed that Toho had created a definitive appearance for the King of the Monsters. However, in 1999 the evolution of Godzilla would take a new and unexpected turn.

English Sources
“The Illustrated Encyclopedia” of Godzilla by Ed Godziszewski.
Markalite #2, “How to Make a Monster – Building Godzilla”, by August Ragone and Guy
Mariner Tucker.