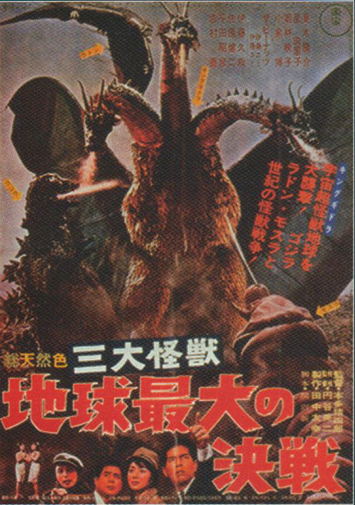 One of the most popular Godzilla movies, Ghidrah, the Three-Headed Monster is a landmark in the series.  The crossing-over of monsters from their own films (begun in Godzilla vs. the Thing, 1964) is brought to a new height, as Ghidrah features a “reunion” of Godzilla and Mothra as well as the return of Rodan (originally seen in Rodan, 1956).  Ghidrah also saw Godzilla change from villain to hero, though for most of the film he is evil.  Ghidrah set the formula for the rest of the series into the seventies; the Godzilla films would now be humorous and monster-packed.  Finally, Ghidrah saw the introduction of the archenemy of Godzilla, the most powerful monster in the universe: King Ghidorah.

Ghidrah, the Three-Headed Monster is considered a sequel to Godzilla vs. the Thing for several reasons.  Two of the lead actors, Hiroshi Koizumi as Professor Murai and Yuriko Hoshi as Naoko Shindo, portray characters nearly identical to their roles in the previous film; respectively, Professor Miura and Junko (Yoka) Nakanishi.  Also, the Twin Fairies of Infant Island, once again portrayed by Emi and Yumi Ito, play a pivotal part, and reference is made of the war between Godzilla and Mothra.

Toho had not planned to film Ghidrah in 1964, but at a later date, finishing 1964 with a non-SPFX movie.  However, the proposed film was cancelled and Ghidrah was pushed into production.  Although rushed, this is not overly apparent in the finished film, save for a few SPFX shots where regular speed photography was employed rather than more convincing slow speed photography.

When viewing the American version of Ghidrah, one gets the impression that the film was more or less left intact for American import.  Viewers with a sharp ear will notice that some American “library” music, which sounds nothing like Akira Ifukube’s style, was inserted into the film.  However, when watching the Japanese version, it becomes shockingly evident  that Continental tampered with Ghidrah more than one would think, and certainly far more than was necessary.  After King Kong vs. Godzilla (1962), Godzilla 1985 (1984) and Godzilla, King of the Monsters (1954), in that order, Ghidrah is next in line as the most “Americanized” Godzilla film, followed by Gigantis, the Fire-Monster (1955).

Many genre fans agreed that the problem with Ghidrah is its’ disjointed script, with a human plot and a monster plot that bear scant relation to each other.  The result is like watching two different movies, and the Americanization splits the two plots apart further.  Following is a list of major scenes that were deleted from the American version of Ghidrah, with comments where necessary.

Scene at police HQ.  This is the first time we see Detective Shindo (Yosuke Natsuki).  A reporter is asking Shindo for anything newsworthy, but Shindo brushes him off. Shindo and the reporter then take notice of the meteor shower outside.  Shindo then glances at a newspaper headline about strange weather changes occurring in the world.

Shindo returns home from work in time to see Professor Murai drop his sister Naoko off.  It becomes obvious that this scene was snipped from the American version when, in the next scene, Shindo comments on Naoko’s “new boyfriend” and his “new car”.

After the broadcast of the Twin Fairies’ “Song of Happiness” on television, Shindo remarks to Naoko that he doesn’t care much for the show or the Twin Fairies.  Naoko teases Shindo by commenting that he doesn’t like to watch girls on TV.  In a rather boorish manner, Shindo angrily grabs the front of Naoko’s blouse, and in front of their mother.  In the American version, one can see Naoko fix her blouse as Shindo walks away.

Chief Editor Kanamkai (Kenji Sahara), of the “Mystery of the 20th Century” TV program, is shown talking to Naoko and a group of reporters at a table laden with photos of the princess-turned-prophetess/Martian, Princess Selina Salno (Akiko Wakabayashi, called Mas Dorina Salno in the Japanese version).  Kanamkai is stressing the importance of keeping track of the princess. Sahara’s role in the film was already brief, and the deletion of this scene reduced his role even more.

When Rodan emerges from Mount Aso, a long shot of the great Pteranodan hovering over the volcano, with tourist buses speeding away in the foreground, was removed.  This shot was probably deleted since the models representing the tourist buses looked unconvincing.  This removal is obvious since the shots of Rodan preceding and following the deleted scene do not match in camera angle.  However, it is part of the Japanese version that Rodan lets out a brief cackle that sounds like Godzilla’s roar.

After the assassins fail to kill the princess in the hotel at Yokohama, Shindo and Naoko begin to escort the princess past a bay window and out of the room.  In the Japanese version, this scene continues with an explosion from outside, and Shindo and Naoko dash to the window to see what happened.  The cause of the explosion is Godzilla, who just destroyed a ship in Yokohama Bay.  Removal of this scene further separates the two plots, and weakens the impact of Godzilla’s entrance.

During the resulting panic in Yokohama, a shot was removed where the assassins are shown diving away amidst the crowd.  Removal of this scene further separates the two plots. 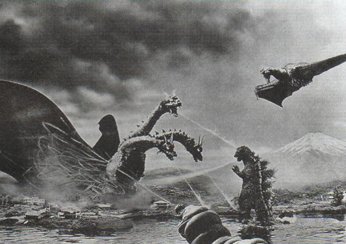 More than deleted scenes, the major difference between the Japanese and American versions of Ghidrah lay in shifted scenes. Throughout the film, Continental shuffled an incredible amount of footage around (a fact that made comparison of the two versions especially frustrating!)  Since a full, scene-by-scene comparison of both versions would be much longer than this article, only a few major instances of scene shifting will be listed.  These are:

– The meteor that contains King Ghidorah crashes in Kurobe Gorge after the princess’ plane is blown up, not before as in the American version.

– The scene when the princess warns of imminent doom to the passengers and crew of the ocean-liner occurs after Professor Murai confirms that the meteor is growing (which itself was placed earlier in the American version).  In the American version, this scene was spliced in after Rodan’s appearance at Mount Aso.  Another slip in the Americanization has a reporter ask the Fairies: “What can you tell us about Rodan and Godzilla?”, although Godzilla has not yet appeared in the film. In the Japanese version, the reporter only asks about Rodan. – King Ghidorah hatches from the meteor following a long shot of  Godzilla and Rodan sparing at Mt. Fuji.  In the American version, King Ghidorah’s birth occurs earlier, immediately after Godzilla and Rodan appear in Yokohama.

– King Ghidorah’s first attack occurs immediately after his creation scene.  In the American version, this sequence is spliced in as the princess, undergoing examination by Dr. Tsukamoto (Takashi Shimura), warns of the arrival of King Ghidorah.  The Americanization is especially bad in this regard, since everyone  at the clinic should already have heard of King Ghidorah’s appearance the night before.  Furthermore, it appears ridiculous to have the princess name King Ghidorah for the first time, and then to cut to a patrol car warning of King Ghidorah by name.

– When Malness and Shindo shoot at each other in the ravine, this is one long sequence.  The American version spliced into this scene footage of Godzilla and Mothra tangling with King Ghidorah that appears after Malness was killed by a landslide.  Here the Americanization works better than the Japanese version, since it links the two plots together. 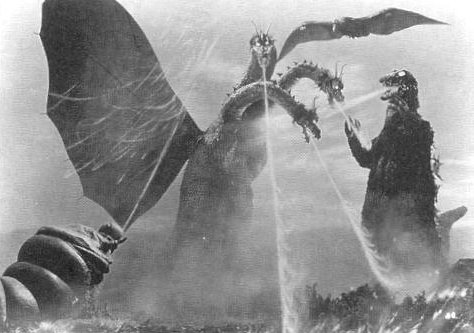 Continental botched Godzilla’s entrance not once, but twice. In the Japanese version, Godzilla raises from the ocean, turns and incinerates the nearby ocean-liner.  This is one of Godzilla’s best entrances in the entire series.  In the American version, footage of Rodan flying against the night sky and a close-up of Godzilla’s face, both of which appear later in the Japanese version, were spliced in.  The Americanization ruins the feel of Godzilla’s first appearance and implies that Godzilla’s return was due to Rodan’s soaring overhead.  For Godzilla’s entrance into Yokohama Bay, the Americanization has Godzilla first on land, then in the bay, and then back on land.  Why Continental would ineptly shuffle so much footage around is a mystery of the process of Americanization.

Continental also tampered extensively with Akira Ifukube’s score. Throughout the movie, entire tracks, such as the “Kurobe Gorge”  theme and much of the “Godzilla vs. Rodan” theme were removed and replaced by awful library music.  Conversely, in several instances library music was inserted in scenes that were not scored.  This meddling of Ifukube’s excellent score did nothing but ruin the impact of several SPFX scenes.  This is most apparent in Godzilla’s appearance in Yokohama; in the Japanese version, Godzilla and Rodan have distinct themes that beautifully unite to create one of Ifukube’s most recognized pieces.  In the American version, the substituted stock music  destroys the impact of the two titans seeing each other.  Why Continental spent time and money in tampering with the score, and to such bad effect, is unknown.

The dubbing is mediocre at best.  The actors speak in an improvised, almost childish style.  Particularly annoying is when the princess when she believes herself to be a Martian (Venusian in the Japanese version, which makes more sense, since Venus was belived to be Earth’s sister planet in the 1960s); she speaks like a robot.  In some instances, Continental dubbed in dialogue where there was none in the Japanese version.

Some of the sound effects were remixed for Americanization, notably in the final battle of the titans.  When Shindo and Malness hunt each other each in the mountains, the monsters’ roars were dubbed onto the soundtrack, actually to good effect.

Looking past Continental’s less-than-competent Americanization, Ghidrah, the Three-Headed Monster can still be enjoyed as a colorful and exciting entry in the Godzilla series.  Many of the SPFX scenes, notably the fiery birth of King Ghidorah, hold up well by today’s standards.  Ghidrah was well publicized by Continental, yet formed part of a bizarre double-bill with Elvis Presley’s Haram Scaram