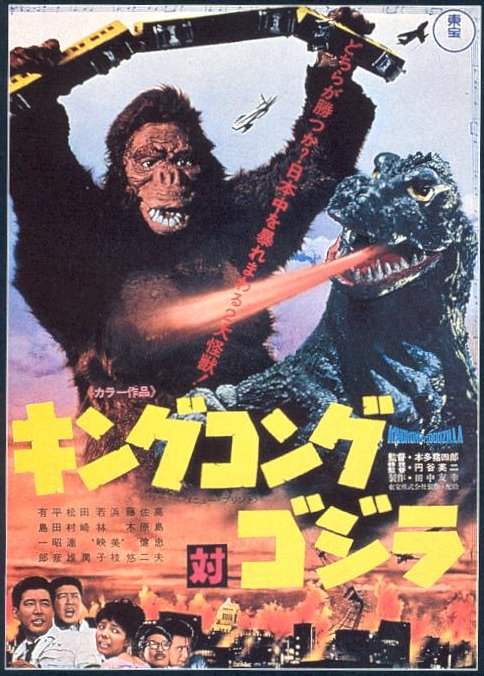 The release of “King Kong vs. Godzilla” heralded the return of the King of the Monsters to the big screen after an absence of seven years in Japan and four years in the United States (remember, “Gigantis the Fire-Monster” only made it to the U.S. in 1959). Godzilla’s third appearance was indeed a grand event, for it was his first color, widescreen and stereo film. It was also the first (and so far only) time that Godzilla challenged an American rival: King Kong. The resulting film still holds the highest attendance record in the Godzilla series.

Hollywood SPFX genius Willis O’Brien, who originally brought King Kong to life in 1933, had for years been hoping to make another King Kong movie utilizing his fantastic stop-motion techniques. O’Brien wrote a screen treatment called “King Kong vs. Frankenstein”, later renamed “King Kong vs. the Ginko”. In this comical story, showman Carl Denham revels that King Kong did NOT die, but was smuggled to Skull Island and nursed back to health (an idea that sounds like a precursor to Dino De Laurentis’ disastrous “King Kong Lives” <1987>). Meanwhile, the grandson of Dr. Frankenstein has created a new creature, fashioned from the bodies of dead jungle animals; elephants, bulls, etc. This new Frankenstein monster is dubbed “the Ginko”. Demham proposes a “boxing match” between King Kong and the Ginko, and the two giants eventually battle it out in San Francisco. Both creatures ultimately fight on the Golden Gate Bridge and plummet into the bay, never to be seen again.

Unable to get financing on his own, O’Brien took his treatment to producer John Beck. Beck liked the idea, but not O’Brien and promptly removed him from the project. Beck then hired George Yates (“Them!”) to rescript the story. Yates put in a number of changes and renamed the script “King Kong vs. Prometheus” (this title is not as incongruous as it sounds; Mary Shelly’s 1818 classic novel is actually called Frankenstein, or the Modern Prometheus). Encountering the same lack of financial backing as O’Brien did, Beck eventually took the story to Toho. Toho’s executives liked the basic idea, finding it the perfect way to reintroduce Godzilla to the world. Under an agreement with RKO (the copyright holders of King Kong) Toho would produce and release the film, with RKO holding the rights and Universal Americanizing and releasing the film stateside. The result was two radically different versions of the same film, and which compare to each other as fine silk (Japanese version) to rough wool (American version).

Although the Japanese version follows the same basic shoreline presented in the American version, “King Kong vs. Godzilla” is altogether different in its’ native form. To start, the newsroom scenes of U.N. anchor Eric Carter (Michael Keith), Dr. Arnold Johnson (Harry Holcombe) and Japanese anchor Utaka Omora (James Yagi) are not part of the Japanese version but were added for the sake of Americanization. To make room for this new footage, numerous scenes were removed from the Japanese version. Since it is beyond the scope of this article to compare both versions scene-by-scene, a quick rundown of some of the deleted footage will need to suffice.

— The globe at beginning of the movie is reveled to belong to a television show owned by the Pacific Pharmaceutical Company. This scene continues with PPC head Mr. Tako (Ichiro Arishima) sitting quite bored in front of his own program, and then complaining to one of his staff about poor ratings.

The ending will be covered later on.

If the deletion of these scenes (and more) were not bad enough, the added American footage only proves to be a major hindrance. In the Japanese version, Godzilla is status quo. The emergence of the King of the Monsters from his icy prison (picking up from “Gigantis, the Fire-Monster”) is watched with horror by the American helicopter crew, who already know of Godzilla. Yet in the American version, Eric Carter announces “The world is stunned to discover that prehistoric creatures exist in the 20th century”. Apparently, everyone at the United Nations has forgotten about Godzilla’s rampage through Japan in 1954 and 1955. Adding to this blunder is Dr. Johnson’s theory that Godzilla is just a hibernating dinosaur awakened from a long sleep. The statement “Fossils found in Japan resemble Godzilla” destroys any illusions created by the first film that Godzilla was a creature born of radiation. These newscast scenes, attempting to give King Kong and Godzilla scientific authenticity, add nothing to the story and are as interesting as weather reports. One scene that has been roundly criticized is when Dr. Johnson holds up a children’s book on dinosaurs to explain his theories on Godzilla. Although the idea that the Curator of the New York Museum of Natural History would use such a book for a lecture is ridiculous, what must be remembered is that in 1963 more serious books on dinosaurs were not readily available. The producers had to make do with the materials at hand.

Another problem with the American version involves shifted scenes. To cover a only a few instances, the scenes with the SeaHawk are condensed, rather than cutting back and forth with the rest of the movie as in the Japanese version. Likewise, the military’s construction of the “Giant Pit” trap for Godzilla is consolidated into one long scene (implicit in the Japanese version is that construction was halted when Kong and Godzilla briefly clashed in the countryside). King Kong’s day scene of charging onto the mainland appears much later in the American version. And so on.

Tossed into the American version are some grainy shots of the U.N. building. Various scenes from “The Mysterians” were also spliced in, including the Mysterians’ HQ (passed off as the International Communications Satellite), generals arriving by car to a conference, and tidal waves and earthquakes thrown in at the finale. This muddle of original footage, American scenes and stockfootage is worsened by sloppy dubbing. When King Kong and Godzilla first skirmish, Kinsaburo says “I’d better get a light check”, only to hold up a microphone. Tamiye (Akiko Wakabayshi) tells Fumiko that Kazuo’s plane has crashed in Hokkaido, but the dubbed dialogue is shown over a newspaper article with a picture of a ship! (in the Japanese version, Kazuo’s ship was sunk off-screen by Godzilla). Furthermore, the natives on Farou Island were not dubbed, so when the translator (Senkichi Omura) speaks to the Chief and back to Sakuri and Kinsabruo, he has two different voices. Even the monsters were not spared from poor dubbing, for when King Kong closes in to fight the giant octopus, a brief bit of Godzilla’s roar can be heard!

Compounding this butchery of the visual is how Universal treated the film’s original score. For his second Godzilla film, Maestro Akira Ifukube composed one of his best and most satisfying scores. Ifukube wrote powerful, distinctive themes for King Kong and Godzilla (it was here that the famous “Enter Godzilla” theme first appeared), an eerie piece for the iceberg and the ill-fated SeaHawk, a theme for the giant octopus, a slow-paced theme for the construction of the “Giant Pit” (which would turn up again as Mechi-Kong’s theme in 1967’s “King Kong Escapes”), a stirring piece for “Operation Kong” and a rousing battle score (reused 30 years later in “Godzilla vs. King Ghidora”). Yet in the American version, NONE of these magnificent themes were used! The only Ifukube piece that survived was the famous Farou Island chant, as well as a brief motif when Sakuri and Kinsabruo travel through the jungle. The Americanization left most of the film either unscored or backed up with stock music from Universal’s “The Creature from the Black Lagoon” and even older films. This music only makes the American version feel like a 1950’s B-movie rather than the major work that it was in Japan.

In it’s original form, “King Kong vs. Godzilla” is a highly enjoyable and entertaining film. Graced with many fine performances, the story is light-hearted, humorous and satirizes the TV industry in a pointed but unmalicous way. Of the American version, it is obvious that Universal had no idea how to handle the film and would have been better off just to dub the production then try to Americanize it.

As has been stated in Kaiju-Fan many times before, there never was, never has been or ever will be two separate endings to “King Kong vs. Godzilla”. In 1962, Godzilla was still the villain and thus destined to lose. However, an interesting case that King Kong actually LOST is put forward by Michael Keller.  Regardless of which monster really won, the Japanese version concludes thus:

As Kong swims out to sea, the screen darkens, followed by GODZILLA’S roar and THEN Kong’s roar. The picture fades to blackout and the kanji characters for “The End” appear.

Until “Godzilla 1985,” “King Kong vs. Godzilla” was the LAST Godzilla film that contained special, made-in-America footage. Herein, the Godzilla films would be trimmed and/or reshuffled and re-mixed for American release. The next film, however, features a special case.