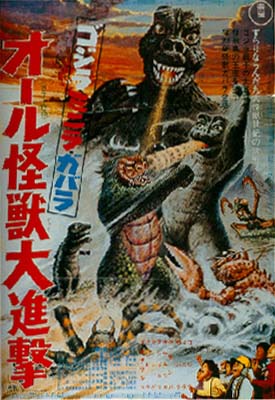 Godzilla’s tenth movie is unarguably the most unusual of all the Godzilla films. Revolving around a lonely boy and his fantasies about Monster Island and stuffed with stock footage from previous films, Godzilla’s Revenge is generally scorned by most kaiju enthusiasts as the worst entry in the series, deserving nothing more than complete dismissal.

However, if Godzilla’s Revenge is taken as an entity in itself and viewed outside of the continuity with the previous films, then it is possible to view it as a highly enjoyable film.  What makes Godzilla’s Revenge one of the best and most unique films in the series is that it is totally unlike any previous Godzilla film, bringing the question of Godzilla’s existence to the very heart of the story. It is never made clear if Godzilla’s Revenge is about a boy who fantasizes about monsters which live on Monster Island in his own world, or a boy who fantasizes about movie monsters which exist in our world. This change in the basic structure of the story brings about a pleasant and much needed switch in the series, just as Godzilla vs. the Sea Monster did in 1966.

Godzilla’s Revenge would also be the last film in the series to take an abstract look at the Godzilla character and relate it to what Honda viewed as a most important subject; the nature of the relationships between fathers and their sons. Unknown to most fans, the film is the story of the father/son relationship, as viewed and dealt with through the eyes of a child. It was this aspect of the story that Honda hoped to convey and he photographed the film beautifully, conveying the cold stark environment of Kawasaki as the worst possible place to raise a family and expressing the strains that a two income family can have on a small child. Honda continually portrays the distance between Ichiro (Tomonori Yazaki ) and his father (Kenji Sahara) by never filming the two in the same shot together; in the only instance where they are photographed within the same frame, they are always kept apart by the distance between Ichiro’s father sitting high above in the engineer’s cab and Ichiro standing on the roadway. In fact, the two sequences between Ichiro and his father last only two minutes within the whole film. To emphasize this point, Honda, a director known for using close ups in his films, photographs the characters from extreme distances, further adding to the cold feel of the film.  Adding to this, Honda had re-filmed the fire-breathing teaching scene from Son of Godzilla (1967), as he must have felt that in the original version Godzilla had acted too leniently towards Minya. This may have reflected Honda’s own feeling toward the relationship between himself and his own father.

Godzilla’s Revenge is a very depressing film, as witnessed by the hussel and bussel of the city, and the screeching of the trucks inspires Ichiro to think of Minya on Monster Island. This is his world and these are his monsters, he must learn to cope with this lonely life. The concluding scene, with Ichiro and his new “friends” running off into the grayness of industrial Kawasaki, is anything but reassuring.

Kunio Miyauchi’s musical score for Godzilla’s Revenge is very effective (it is interesting to speculate how the series regular composer, Akira Ifukube, would have handled the material). Kaiju myth has it that special-effects director Eiji Tsuburaya died during the filming, which accounts for the films extensive stock footage. However, Tsuburaya died in 1970, a month after Godzilla’s Revenge was released in Japan. Honda himself directed the special-effects scenes. Since Toho decided to reduce costs by using scenes from previous films, Honda and screenwriter Shinichi Sekizawa chose to frame the story as a “children’s movie”. A majority of the stock footage was culled from Godzilla vs. the Sea Monster and Son of Godzilla, with a few other shots coming from Destroy All Monsters (1968) and King Kong Escapes (1967), the latter to allow Gorosaurus to make a brief appearance. However, a new shot of Gimantis appears, when the creature crawls over the pit that Ichiro has fallen into.

Gabara, the dreaded bully of Minya, is a different sort of kaiju. More of an ogre than the mutated dinosaurs/insects that populated Toho’s films at this period, Gabara is well-suited for this child’s fantasy. Gabara’s ability to discharge electrical shocks when grabbing his opponents is a touch of the fantastic, and also a sign of things to come for the series.

Light green screen with “A UPA Productions of America Release” 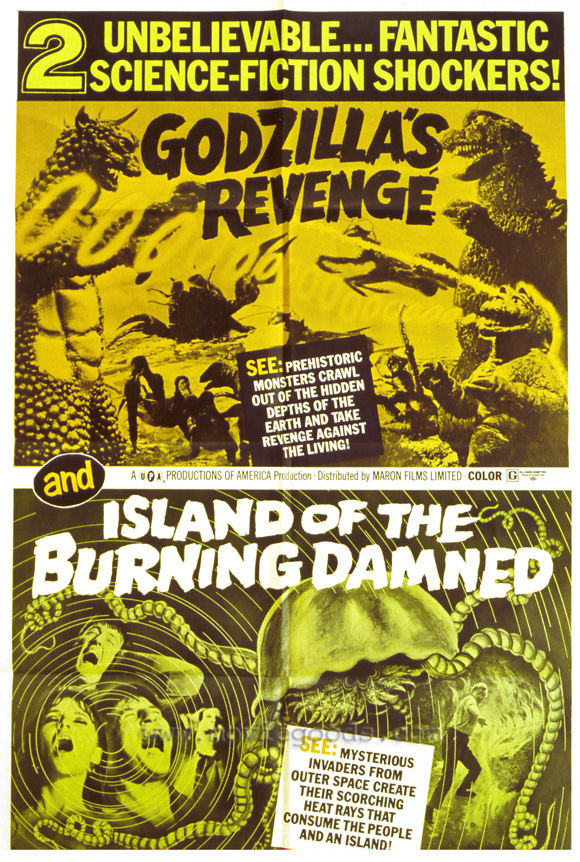 As usual, the Japanese character for “Owari” was replaced with “The End”, in the same fonts as the as the opening credits.  The dubbing is poor, with the voices frequently out-of-synch with the actor’s lips.  Furthermore, the same dubbing voices can be distinguished for the various characters.  Worse, UPA decided to add a light touch of comedy to the film (as if it needed it) by dubbing the apartment house manager (Shigeki Ishida) with an effeminate voice! However, if fans wince at the goofy voice that Minya has in the American version, it is a big improvement over Minya’s original voice. In the Japanese version, Minya sounds like a girl.  Press materials exist showing Godzilla’s’ Revenge on a double-bill with War of the Gargantuas, and also on a triple bill with the latter film and Monster Zero.  Later showings of the film would have it teamed up with low budget features such as Terence Fisher’s “Island of the Burning Dammed,” a Planet Productions film starring Peter Cushing and Christopher Lee.

There are two interesting side-notes to Godzilla’s Revenge, one from Greg Shoemaker of “The Japanese Fantasy Film Journal” and the other from Guy Tucker, author of “Age of the Gods.”

According to Greg Shoemaker:

Godzilla’s Revenge was originally titled Minya, Son of Godzilla, promotional copy forewarning the tone to which the film would adhere: “Every boy needs a friend, even if it’s a monster.” An east coast release failed to deliver the necessary dollar response, so Marion Films, the U.S. distributor, recalled the picture and set about designing a new approach. To play down the kiddie aspect the distributor retitled the film Godzilla’s Revenge, with advertising sporting an assortment of giant beasts to attract the audience previous Toho monster films drew. Word of mouth spread, and the motion picture was withdrawn, sold to television, and released occasionally to theaters for “kiddie matinees.”

Guy Tucker’s observation requires some background information. In the early 1980’s, Toho Video released an eleven-part VHS set called “Toho SPFX”. Each videocassette contained three to four Toho special-effects movies that were edited to “Reader’s Digest” versions, running about 10 minutes each. The editing for these videocassettes was done by none other than Ishiro Honda. In the volume that covered Destroy All Monsters, Godzilla’s Revenge and Latitude Zero (1969), the ending of Godzilla’s Revenge concludes not with Ichiro walking away happily with his friends, but with his mother (Machiko Naka) crying alone. Tucker commented that “Honda wanted to take the opportunity to point out what the real theme of the movie is. I think he ended it this way to remind the viewer that the original problem isn’t completely solved. Just because he got away from the gangsters doesn’t mean that his mother’s going to be at home any more often, or his father either. And she’s crying because she knows this.”

With Tsuburaya’s passing, it seemed that Godzilla’s career had come to an end. In retrospect, his career did end. Indeed, Honda himself felt that without Tsuburaya’s talents, the Godzilla series should have ceased. 1970 was a no-show year for Godzilla. The following year, however, Godzilla would be back in action and battling a new generation of monsters for a new generation of fans.