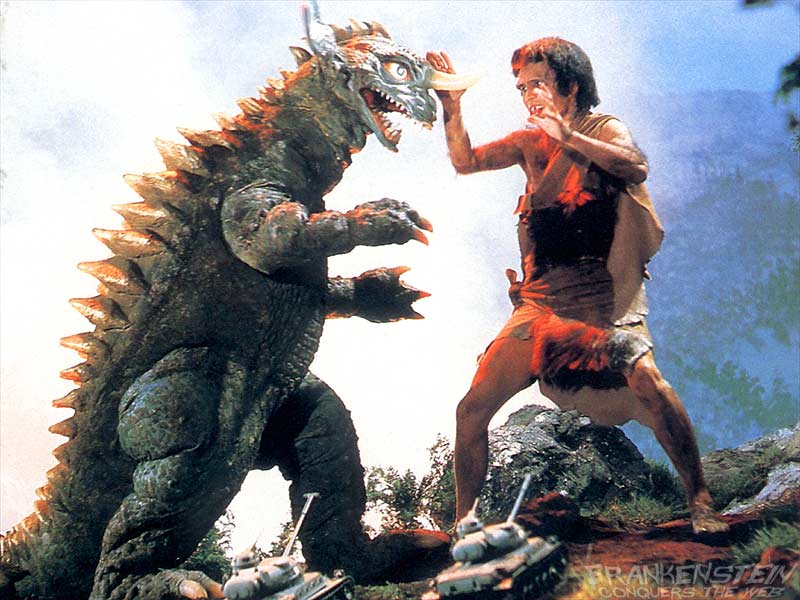 Recently Tom Miller wrote an original and intriguing essay on the Symbolic meaning of Godzilla and his kaiju colleagues through the 1950s and 1960s. In his view each giant creature that appeared in Toho’s classic films stood for a particular nation or region of the world, each manifesting a threatening or benevolent power. In addition to the Godzilla films, he analyzed Frankenstein Conquers the World that got me to thinking, and I would like to present an alternative interpretation of this film.

According to Mr. Miller, Baragon represents the United States, defeated by a Japanese-German alliance as symbolized by the Frankenstein monster.  But in his essay’s single case of inconsistency he also admits that the Frankenstein monster was created when it’s heart was exposed to the radiation of the H-bomb blast over Hiroshima. Thus this combination of a Nazi heart with American technology produces not a fearful monster, but a benevolent one that defends Japan from Baragon. This is true; if you take away the radiation you have no Frankenstein monster, so a more consistent explanation would make the monster a symbol of Germany and Japan’s resurgent economies. Economies operating under the protection of America’s nuclear umbrella. Viewed in this light the monster is a surprising and hopeful acknowledgment that good consequences can come from evil events.

The Frankenstein monster shares something else with these economies too; he grows by leaps and bounds, attaining the stature of a giant.  Barely 20 years after the complete devastation of the Second World War, Germany and Japan were the economic “miracles” of the world, each year growing larger and stronger.  Everyone wanted to know the “secret” behind these astounding achievements and discussion often centered on the character of these two societies.  It was in their “nature” to grow huge and strong, just like the Frankenstein monster.  Not everybody was happy about this. Even today Japanese or German strength can cause unease, and I’ve no doubt that both countries have often felt unfairly attacked; just like the scary looking but friendly Frankenstein monster in the movie.

The monster spends a great deal of the movie running away from blind prejudice.  People keep screaming when they see him, and the military keeps trying to shoot him; despite the pleas of the scientists, who are rational and can see he means no harm.  To add insult to injury, this prejudice also pins the blame for Baragon’s destruction on the Frankenstein monster.

So if Baragon does not represent the U.S., what threat does he allude to?  I would say the threat of International Communism. Look at his characteristics. He burrows underground, sneaking about unseen.  Yet he is a large and menacing danger, causing grave damage to things like oil fields, farms, and oh yes, resorts full of gullible young people.  And after causing all this destruction he vanishes without a trace, just like the communist underground of our fevered imagination, an underground full of moles, saboteurs, and propagandists.

Why would Japanese movies express a fear of communism? Because capitalism was Japan’s salvation from poverty and the road to wealth and security.  Japan’s business elite had always hated communism, and when the Cold War started they got MacArthur’s help in crushing the unions. Sacrifice for the good of the whole was the order of the day, and in the 1960s these efforts seemed to be paying off. Except for a certain restless disaffection growing in the young; they had already fallen for rock-n-roll, what was next?  A Marxist critique of capitalistic imperialism, that’s what. And if that kind of thinking managed to capture the nation what would happen to Japan’s hard won prosperity, not to mention it’s business elite?

In short, the films shows a world that fears and attacks a large but benevolent “monster” while ignoring the real menace lurking under the surface. Only by taking on the real enemy (communism, backed by China & the U.S.S.R.) does the Frankenstein monster (a resurgent Japan and Germany) clear himself in the eyes of mankind.