Secret Task Force: Goranger
The Saga of the Sentai Series
by
August Ragone 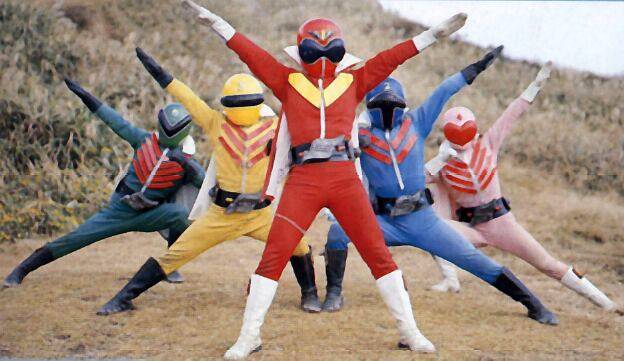 SENTAI(Sen’tai): Adjective.Fighting TeamorTask Force; as in the long-running Toei superhero sub-genre, consisting of between 3 and 6 members, with matching costumes. See alsoSuper Sentai. The “fighting team” concept predates the premiere of Toei’sSecret Task Force: Gorangerin 1975 – but it would take the sheer inventive energy and successfill track record of Toei to bring the first true Sentai Series into the light of day. The Sentai’s origins may be seen as far back as Tatsuo Yoshida’sNinja Squad: Moonlight(Ninja Butai Gekko; 1964-66), a live-action series featuring the missions of a band of modern day martially-dressed ninja, equipped with all manner of weapons augmenting thier ninjutsu techniques, against a number of communist/facist threats.  Shotaro Ishimori and Fujiko Fujio’s 1966 animated series:Rainbow Task Force: Robin(Reinbo Sentai Robin), showcasing the exploits of the jet-pilotting’ youth, Robin and his task force consisting of six automatons. Very similar to Ishimori’s own comicbook and animated series,Cyborg 009(Saibogu Zero Zero Nain) – which in itself has all the trappings of a Sentai. Next we have another animated entry: Tatsuo Yoshida’s ground-breakingScience Ninja Team: Gatchaman(Kagaku Ninja-tai Gacharnan; 1972-74), which introduced the archtypal Sentai hierarchy, a secret HQ, color-coded uniforms w/helmets, an airship to transport them, and the recurring villains, with their threat-of-the-week. Live-action got closer with Kokusai’sBlitzkrieg! Stradder 5(Dengeki! Sutorada Faibu; 1974), but failed to ignite any sparks in its viewers. Meanwhile, Tsuburaya Productions’ Ultra Brothers, began to team up on more occassions in shows likeUltraman Taro(1973-74), and likewise with Toei’s ever-popularKamen Riders. This approach towards Sentai-ism, becomes especially evident in watching the theatrical featurette:The Five Riders vs. King Dark(1974), wherein all five Riders must employ a team-work manuever to defeat the hulking Frankenbat mutant. This is where the creative team at Toei said “Hey, there could be something to this …!” Later that same year, Toei producers Toru Hirayama and Susumu Yoshikawa, NET producer Takashi Ogino, and cartoonist Shotaro Ishimori came together at a meeting to create a new kind of superhero series for Japanese television; the first Toei “Sentai” series. There were three main topics set for the meeting “What type of Heroes will they be,” “Character Design,” and “Naming.”

It was discussed that the origins of the heroes ranged from aliens from another world to robots to cyborgs; it was eventually agreed that the heroes should be mortal, but endowed with super-powered fighting suits. The first proposal was entitled “Red-l” (Redo Wan) -and the characters were to be “Red Mask” to “Green Mask,” but this was changed shortly to “Five Rangers” (Faibu Renja). Here, the heroes were to be named – in English – “Red Ranger.” (Redorenja), “Blue Ranger” (Bururenja), etc. Next came “Go-Rangers” (Gorenja; a double-entendre that plays on the Japanese word for “five”, and the English command verb “go”), where the characters’ colors were pronounced in Japanese: Red Ranger (Akarenja), Green Ranger (Midorenja), etc. The following draft, “Secret Task Force: Goranger” (Himitsu Sentai Gorenja) has the protagonists tagged as “Red Mask” (Kaijo Tsuyoshi), “Blue Mask” (Shinrnei Akira), “Yellow Mask” (Oiwa Daita), “White Mask” (Peggy Matsuyama) and “Green Mask” (Asuka Kenji), and equipped with the jet-helicopter “Red Bruun.” The final draft kept the latter title, and emphasized a spy setting – with the heroes part of an international secret peacekeeping organization, called the “S.P.O.”, eventually renamed “EAGLE” (Earth Guardian League) in the aforementioned final draft. At last, our heroes became Red Ranger (Akarenja), Blue Ranger (Aorenja), Yellow Ranger (Kiirenja), Green Ranger (Midorenja) and Pink Ranger (Momorenja)…Battling the oppresive might of the “Black Cross Army” – five together, they are GORANGER. The names of the human identities from the “Go-Ranger” draft were retained into the actual series, but thier jet-helicopter became an APC/Assault Airship: the “Varibluun” (an pun of the sound of an engine igniting and rewing).

The only other vechicles included two sidecar superbikes and one sigle for the leader, and the team possessed individual weapons to suit their style: Red (gun, whip, & spear), Blue (bow & arrow), Yellow (strength), Pink (explosives ), and Green (boomerang). With cast members who were veterans in the superhero genre – Kaijo was played by Naoya Makoto from Tsuburaya’s 1973 series Fireman (Faiyaman), Asuka by Yukio Ito, who appeared in Ultraman Leo (Urutoraman Reo; 1974), and most importantly, Shinmei by Hiroshi Miyauchi who exploded on television screens across Japan as Kamen Rider V3 (Kamen Raida Buisuri; 1973) – Goranger created a sensation in Japan, and was the only other superhero series, in league with the original Kamen Rider, that ran two consecutive years – yielding 84 episodes in total. For the second season, the teams older weapons and machines were destroyed or were simply upgraded: the new aiship “Varidoreen” carried the armored “Varitank,” the bikes were changed over, new personal weapons were given to our heroes, and Yellow Ranger invented his own variation of a hitech hot-air balloon, the “Varikikyuun.” Finally, after numerous battles and adventures, the Goranger team were able to defeat Generalissimo Blackcross and his minions forever…setting the stage for a new series, with a new motif. Jacker: Blitzkrieg Squad aka J.A.K.Q. – along road from the Mighty Morphin Powr Rangers to be sure – but, no other Sentai series has come close to the success of the original Secret Task Force: Goranger