Not available on home video in America

Like its predecessorChikyu Boeigun(Earth Defense Force, 1957. US title: The Mysterians, 1959), Toho’s second space operaUchu Daisenso(The Great Space War) was also based on the works of SF writer Jojiro Okami. Uchu Daisenso depicted a paramilitary United Nations space force that resembled what might have evolved after the events ofChikyu Boeigun. As before, the alien enemies attack with flying saucers that, other than a new paint job and the substitution of “space torpedo” ports for an antenna, were identical to those of the previous film. It was also populated by characters sharing the names of those fromChikyu Boeigun. On the other hand,Uchu Daisensomakes no direct references to the earlier film or previous contact with extraterrestrial beings, nor does it acknowledge or try to explain why the new invaders from the planet Natal (pronounced Na-tahl) have ships so similar to the Mysterian flying saucers. Also, with the exception of Harold S. Conway’s Dr. Immerman, different actors portray the characters common to both films. So wasUchu Daisensoa sequel toChikyu Boeigunor not?

Uchu Daisenso was Toho’s first “pseudo sequel,” a scenario seemingly conceived as a sequel which evolves into a stand-alone film, but still retains elements of its sequel origins. There are hints of continuity that are ragged and inconclusive, coming across as a sequel written from faulty memory.  Uchu Daisenso’s link to Chikyu Boeigun is the same kind of nebulous connection that would later link Frankenstein no Kaiju: Sanda tai Gaira (Frankenstein’s Monsters: Sanda vs. Gaila, 1966. US title: War of the Gargantuas, 1970) to Frankenstein tai Chitei Kaiju Baragon (Frankenstein vs. the Underground Monster Baragon, 1965. US title: Frankenstein Conquers the World), Mothra tai Gojira (Mothra vs. Godzilla, 1964. US title: Godzilla vs. The Thing) to Mothra (1961), Chikyu Sandai no Kessen (Earth’s Greatest Battle, 1964. US Title: Ghidrah the Three Headed Monster, 1965) to Mothra tai Gojira and even Wakusei Daisenso (The Great Planet War, 1977. US Title: The War In Space) to Uchu Daiseso

The common links between Uchu Daisenso and Chikyu Boeigun have lead to the unfortunate tendency to make apples-to-apples comparisons of the two films. Despite the similar starting point, both screenplays were developed in different manners. Like Gojira (1954. US title: Godzilla, King of the Monsters!, 1956) and Sora no Daikaiju Radon (1956, US title: Rodan, 1957), Chikyu Boeigun’s sci fi story thinly masks a dramatic subtext dealing with Japan’s very real fears of atomic science and racial impurity (the Mysterians want to mate with Japanese women because radiation has caused their own women to produce deformed offspring). Other than reinforcing director Ishiro Honda’s theme of the Earth’s nations uniting peacefully for the good of all mankind, Uchu Daisenso was clearly intended to be no more than a straight sci-fi adventure film or “a big, gorgeous cartoon” in the words of Guy Tucker.  It is arguable that Chikyu Boeigun may have been the weakest of Toho’s space operas of the late 50s and early 60s and that Uchu Daisenso is more successful at achieving its goals than the former film. However, any direct comparison of the two proclaiming Uchu Daisenso to be the superior film must acknowledge that this victory is largely due to lowering the bar concerning the latter film’s objectives.

Uchu Daisenso was made in the wake of Toho’s other major release of 1959, Nippon Tanjo (The Birth of Japan, 1959. US title: The Three Treasures. International title: Age of the Gods). The Japanese equivalent of an American biblical epic, Nippon Tanjo was director Hiroshi Inagaki’s epic interpretation of Shinto mythology and featured seemingly every actor and actress under contract to Toho at the time. Eiji Tsuburaya, Akira Ifukube and other staff members worked on both films that year. (Although Nippon Tanjo did receive a US release it will not be covered as part of “Toho in America.”)  Columbia Pictures, who had released The H-Man the year before, released Uchu Daisenso in 1960 as Battle in Outer Space. Battle in Outer Space is unique among the films covered SO far in that no changes were made to the film’s running time or the sequence of scenes. The few visual changes made to the film were limited to the standar dsubstitutions of American text for Japanese. The film’s audio tracks are another matter, as they were extensively altered throughout the film. In fact, the film’s audio alterations are so varied and subtle that those cited below aren’t comprehensive, representing only some of the more noteworthy examples. An examination of the changes follows. As usual, differences found in the Japanese version are indicated by bold type

A TOHO Production
in
TOHOSCOPE 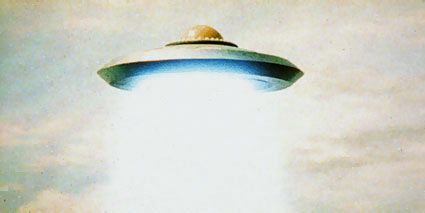 In short,Battle in Outer Spacerepresents a faithful translation of Ishiro Honda’s film, diluted only by a few concessions to the US market. Columbia deserves praise for having enough faith inBattle in Outer Spaceto leave it more intact than almost any other Japanese film released in America up to this point. The few visual changes as well as the sound effects alterations are trivial and don’t really impact the film one way or another. The only change worthy of debate would be the removal of Akira Ifukube’s battle marches; clearly the substituted American music wasn’t as good, failing to give the battle sequences the appropriate energy and fast pacing as well as Ifukube’s did. Unfortunately, the sudden switch from ominous, suspenseful music cues to scoring evocative of victory for the film’s final third comes across as a bit too extreme and perhaps prematurely overstates the direction the film will take. While it’s a good bet from the start that the Earth forces will emerge victorious, Ifukube’s marches entirely invalidate the pretense of possible failure, thereby diffusing any suspense concerning the film’s outcome. This would have seemed particularly inappropriate to the audiences of 1950s America, who were used to more suspenseful and less perky scoring for this type of film.

The dubbing by Bellucci Productions (who later dubbed Ghidrah the Three Headed Monster) is perhaps the most disappointing aspect of the American version. The voice actors involved tried much too hard to sound like English-speaking Asians, resulting in Japanese male characters such as Yumamura and Katsumiya (Ryo Ikebe) sounding like overgrown children. There are also several instances of reversing the ‘L’ and ‘R’ sounds in the dialogue: “These are the headrines of your Tokyo terevision news. They are both unexprainable events.” Bellucci made a few alterations from the Japanese version in the dubbing; after switching from a Japanese reporter (who narrates this entire sequence in the Japanese version) to American reporter Thomas Sheldon during a news montage sequence early in the film, the US dubbing has Sheldon take over the narration. When the Natal-possessed Iranian delegate Dr. Ahmed (George Whyman) is being {apparently unknowingly) disintegrated by a flying saucer, his laughter in the Japanese version is replaced by what can only be described as an annoying, whiny scream. The US version also adds background dialog to a shot, reverently silent in the Japanese version, of the Defense Commander (Minoru Takada) bowing his head in relief when the aliens have been defeated 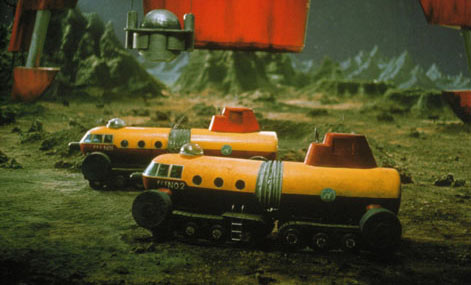 Battle in Outer Space is one of three Honda-directed Toho genre films which has never been available on home video in America. It’s also the only one of Columbia’s three Toho releases (which also includes Mothra and The H-Man) which has yet to see a us video release. This is surprising as it’s probably the most exploitable of the three Columbia properties. Considering the immense popularity of the Star Wars films during the home video era, one wonders why Columbia never attempted to cash in by offering this film, emphasizing its thematic debt to George Lucas’ cash cow. Even more amazing is Columbia’s failure to release it in the wake of the most recent revival of space operas which began with 1996’s Independence Day and continues via the Star Wars Trilogy Special Edition. If Battle doesn’t see a video release by the time the new Star Wars films comes out on video, it most likely never will.

The only way to see Battle in Outer Space in America these days is via one of its infrequent TV airings which utilizes a transfer made from a beautifully remastered print. Regrettably, this print is missing part of a scene about 10 minutes into the film that was originally in most theatrical and TV airings seen previously. For the record, an entire transcript of the scene follows with the missing footage denoted by bold type

Immediately before the arrival of Inspector Ariake (Fuyiki Murakami), who comes look- ing for Dr. Ahmed prior to his doing anything criminal, the following discussion takes place in the UN meeting room:

Defense Commander: If we acknowledge the fact that the Earth has entered upon the space age we must be prepared to admit that, just as we can go from Earth to the planets, there must be other beings whose intelligence is superior to ours who’ve (sic) solved the prob- lems of space better than we have.
India Delegate: Dr. Adachi, what do you think their purpose is in coming to the Earth?
“F.R. German” Delegate: Wouldn’t you say they came here impelled by the same kind of scientific curiosity we might feel about them?
Phillipines Delegate: Could it be they plan to conquer the people of Earth?
Dr. Adachi: I only wish I knew the answers to these questions, gentlemen. I couldn’t care to guess what the future holds, though I’m sure we all hope that this is a peaceful visit.
Dr. Immerman: Unfortunately, we do not understand their lan- guage, but we should by all means possible continue to urge peace. On the other hand, we should also study measures to repulse them if attacked.
(Audience applause)
Defense Commander: I hereby declare that this meeting is ad- journed.
(More audience applause)

According to Japanese sci-fi film historian Steve Ryfle, a 1996 screening of a 35mm print of Columbia’s Battle in Outer Space in the L.A. area featured all of the dialogue from the above scene, but the screen was blank during most of it. This would seem to imply that the reason for the deletion in TV prints is the lack of the footage, but not the English dub track. One has to wonder if Columbia has considered attempting to contact Toho about acquiring the missing frames and restoring the American version.